hardcore fried chicken.  A mini-excursion to Texas (either Frisco, Tx or Roanoke, Tx both near Dallas) took care of that need.  The place is called Babe’s.  It’s quirky.

The first time I went to the Roanoke, Tx location and three of us sat.  The waitress came over and said, “You boys

I was the loser who said, “We haven’t seen a menu yet.”

She looked at me like I had some sort of disability and slowly said, “We only got two thing – fried chicken and fried steak?”

Me: “I’ll have the fried chicken.  Does it come with anything?”

The Frisco location has a bit more choices (five to be exact) and this time we got fried chicken and fried catfish, plus all the sides of course.  It’s a BYO with fun, singalong music.  Here is the meal:

Starter:  Tossed iceberg salad with a dressing made basically from sugar, oil, vinegar, and salt. Plus biscuits with sorghum syrup or honey.  Now how often do you get sorghum syrup – that’s a treat. 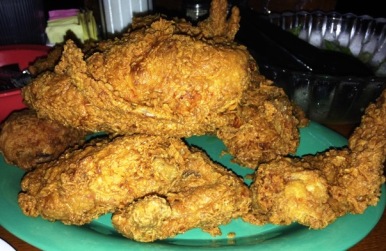 Catfish and Sides.  Catfish with tartar(?) and the parade of unlimited sides:  mashed potatoes and cream gravy, cut beans, and creamed corn.  I don’t even really like cream corn but something about theirs made us get two bowls and finish them both. 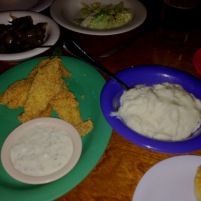 It’s a great place for people watching like our fun waitress and some guy chomping his chicken, drinking a 22 of beer, and giving me the middle finger for, I suppose, randomly taking his picture. 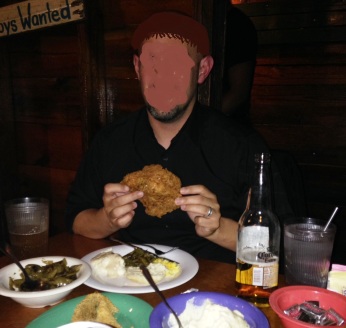 If I had a Triglycerides or cholesterol test tomorrow I would fail.  And be good with that.