Welcome You Must Go To Vanuatu.

In my desire to get really far away, I stumbled upon a wonderland island-nation named Vanuatu.  The post titled Being Intimate with a Volcano explains how I found Vanuatu and goes in-depth about one of the country’s many highlights –  Mt Yasur volcano on Tanna Island.

This post takes us to the capital of the country:  Port Vila on Efate Island. 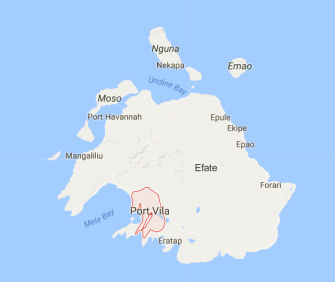 Vanuatu is a democratic republic of 79 islands, many of them actively volcanic, much of the country undeveloped. It had been colonized by both the British and the French and became independent in 1980.  It had some significance in WWII and one of its islands had been a “Survivor” location years back.  The official language of Vanuatu is Bislama, an English-based pidgin language.  If you were wondering, the title of this post is in Bislama.  It is fairly phonetic except the word ‘long’ which serves as a general purpose preposition (to, at, on, after).

As my reality was only 3 weeks for this trip, I picked two islands:  Efate which holds the capital Port Vila and the only international airport and Tanna which is far less developed and has an accessible active volcano.

Port Vila.  The capital of Vanuatu, Port Vila, has a population of about 15,000.

They have an active dock, restaurants, stores, gift shops, and banks.  Port Vila felt safe and the people were very nice.

A rightful source of pride for Vanuatu is the Port Vila Public Library – a first for this country.

Another site is the Port Vila market open 24-hours.  The vendors bring their fruits, vegetables, crafts, and other wares in on select days, and do not leave until everything is sold.

Nothing is very expensive in Vanuatu, but they only take their own currency.  This is not at all a place to pull out the card for every purchase.

One night for dinner I “splurged” on a finer restaurants named Chill.  It is on the second floor facing the harbor waterfront.  I received the typical warm Vanuatu greeting and had a house specialty:  free-range, organic, grass-fed beef with a home-churned herb butter served with white rice and cabbage slaw.

This is how food should taste: clean, full-flavored, and real.  I washed it down with a couple Tusker beers, the easy to drink and pleasant local lager.

I spent the week at the Paray Lodge as a home base  – comfortable and mostly open air.

The lodge advertises a shower (albeit no hot water but that was OK).  One amazing thing is that twice a day they put these beautiful flowers everywhere.  I did not fully appreciate the purpose until I looked inside one.  The flower attracts many kinds of bugs, and once they enter the flower, they get stuck on the flower’s stickiness and cannot get out.  Far more sustainable than chemical bug spray.

There is an island named Iririki in the Port Vila harbor which has a luxury resort.  I met a few people staying at the luxury resort and we got to talking.  They asked where I was staying and I said at a lodge atop the hill.  They seemed a little surprised and they asked what Vanuatu was really like. That was significant to me.

As Efate island is not too big, Port Vila is a good base for day trips.  More about Vanuatu, including exploring Efate and Tanna coming soon. If you ever want to get off the beaten path Port Vila, Vanuatu is a great start.

One thought on “Why You Should Visit Vanuatu”