A blogger once told me – celebrate all your blogging victories – big, little, everything – in your blog.  So here is my celebration!!!! This is totally exciting to me! And, at least for my blog, this victory was pretty big.

My post called American Airlines First Class Domestic Meals (which I published on July 16, 2017) got picked up and linked in the article Did 19 American Idol Winners Bring Guns on Planes? And American Gives Up on First Class Meals. 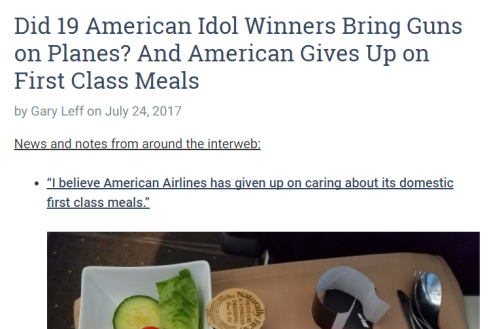 The author (Gary Leff who was named one of the “World’s Top Travel Experts” by Conde’ Nast Traveler multiple years) thought my post was worthwhile enough to share with his broad audience. He included my opening statement: “I believe American Airlines has given up on caring about its domestic first class meals,” with a hyperlink to my blog.  Gary Leff writes in the very popular View From the Wing section of the Boarding Area website about frequent-flier-airplane-airline-industry-news.  Boom went my views.

I checked my blog statistics Monday afternoon and my eyes went wide, “Whoa what is going on here.”   I just sat there and watched that orange bar visibly creep up (regular bloggers know what I’m talking about).

It was less than a month ago that I celebrated Paul Sees The World is 6 Months Old Today and now this.  Again, I thank every one of you that reads my blog, comments, likes, follows, subscribes, and even dislikes or gives me shit (because it means you read it and bothered to say something).

So What About Those 19 American Idol Winners?

American Idol Season 10 winner Scotty McCreery got arrested in Atlanta recently for trying to bring a loaded 9 mm Smith & Wesson handgun through a passenger checkpoint before boarding a flight.  The author’s point in saying 19 American Idols is that at today’s TSA failure rate of detecting threats, that is how many would have gotten through without being caught.

And to Scotty McCreery – what were you thinking man?  Even though you won American Idol, your no Justin Bieber to be pulling this crap.   Plus, what were you planning to shoot?  Some birds before they got sucked into the jet engine?  Nervous that Captain Sully is retired?

Leave the loaded gun at home Scotty.  Hide it in your bible.   Heck, I voted for Casey Abrams anyhow that season – way better musician.

A Message to American Airlines

So to American Airlines (and other airlines) – we have not (yet) given up on you.  But we hope you are listening.

And as my 20 minutes of blogging fame is coming to an end, I will close this by once again saying thank you to all of my readers.