In a previous post, I included the following paragraph:

“I had previously bought a scorpion sucker for my middle-school nephew (along with candy cigarettes –  wow you’d have thought I bought him the Kamasutra based on grandparent’s reaction – but I will save that story for a future post).”

So by semi-popular demand, here is the candy cigarette story:

Parents – Both my parents smoked when I was growing up.  My father smoked a lot of Marlboro’s, my mother far less. My mother quit before I started high school.  My father took   a health scare to finally quit.

Me – I never had any interest in smoking cigarettes and therefore didn’t.  None of my brothers ever smoked either.  I personally think cigarettes are a nasty habit, but I don’t judge (unless you throw your butts on the ground).

Candy Cigarettes – We enjoyed candy cigarettes as kids, being silly “smoking” them and imitating the stupid things adults said. Lets be clear – we only got the candy cigarettes, never the bubble gum cigarettes.  I personally think chewing gum, and especially bubble gum, is another nasty habit, but again I don’t judge (unless you throw your chewed gum on the ground).

I Bought Candy Cigarettes As a Kid’s Gift

My nephew’s birthday (10, 12, 13 something like that) was coming up so I bought him a scorpion lollipop and some other creeper candies, plus ultra sour things that the kids have a contest to see how long they can keep in their mouths.  And right by the checkout were candy cigarettes, and hey candy cigarettes are fun (see Epilogue 1 at the bottom of this post), so why not toss them in.  Plus they were only 75 cents a box. Now remember that price because it is important in this story.

Billysky my cat in the car.  Check.

Said nephew opens my gift.  Both grandparents instantly saw only one thing in the package of treats.  My arthritic old mother’s hand flung out like she was doing a clean steal at an NBA championship game and grabbed the candy cigarettes.  “What to hell is wrong with you?” she asked me.

My mother angrily:  “Your going to lead that boy to smoke?  Is that what you want?”

Me:  “We had these as kids and we never smoked.  Unlike you and dad!”

My mother:  “That’s ridiculous?  I never smoked and your father quit right after we were married.”

Me: “You definitely smoked.  And dad smoked a lot.”

My mother:  “Don’t disrespect your mother.”

Me turning to my father:  “So you quit before I was born???  And she never smoked??”

My father playing his pivot game:  “You shouldn’t have gotten them for him.”

My father: “That was different.”

That was different!  Oh OK dad, you’re right and I’m wrong.  As if I’m an idiot.

The birthday boy and his siblings were still sitting there having halted the gift opening – they appeared truly fascinated with this discourse.

Me addressing my mother: “You always bought [brother’s name redacted] Doritos.  Did that make him a pothead?”

My mother at peak voice:  “Is your brother using drugs?” She turned to him: “Are you on drugs? I need to know if you are?”

Then my mother hit me with the ringer:  “How much did you pay for those damn things anyhow?”

In this age of technology and consumerism, when you get your nephew a gift that costs only 75 cents, regardless of what else you got him, well you never want to be known as the cheap uncle – in spite of everything else in the box.  No way was I stating the price.

The conversation suddenly ended. And I lost.

Funny thing, the kids parents never got a say in this discussion.

How much fun are candy cigarettes?  They are great fun (and really sweet). 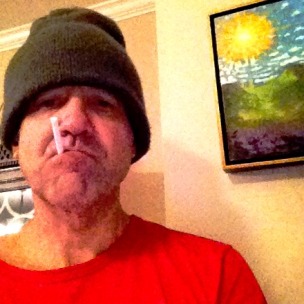 And you can light candy cigarettes.

This nephew is a nice boy.  Later he found me and gave me back the candy cigarettes (ironically my mother just left them on a table).  He said, “It’s OK Uncle Paul.  They’re letting me keep everything else.  And it was pretty cool seeing my dad get yelled at by grandma at for something he didn’t do.”

2 thoughts on “Candy Cigarettes and the Kamasutra”