A weekend trip to the Windy City!

I met up with three amazing people:  a great friend from California who is always open to living life to the fullest; my funky, funny niece who recently moved to Chicago; and a friend who lives in Chicago and is the perfect balance of exceptional intelligence and warmth.

The highlight of the weekend for me was of course reconnecting with people I am very fond of but infrequently get to see.  Other than tickets to a Second City Comedy on Saturday night, we had no real agenda.   (Note:  None of the other 3 wanted to be pictured in my blog boo hoo).

Friday night was dinner and reconnecting.  Chicago has a lively restaurant scene.  After dinner we walked around Old Town – festive and alive.

Saturday started with a walk to the Chicago Riverwalk trail.

We then headed over to the Navy Pier. How can anyone turn down a giant Ferris Wheel? The views alone are worth the ticket price.

Looking down from the top of Ferris Wheel 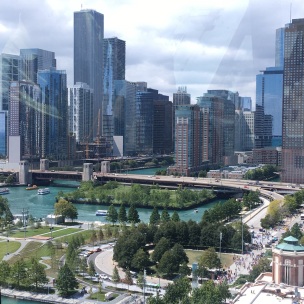 Chicago skyline from atop the Ferris Wheel

A bubble machine in one of the parks gave joy to many (including us).  What other city does something cool like this? 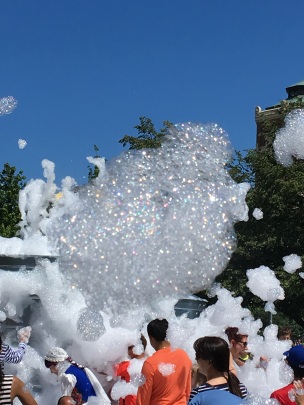 After lunch, we visited the Chicago Cultural Center. If you go here, look up because the ceilings in particular are stunning. Once again, the photos do not do it justice. 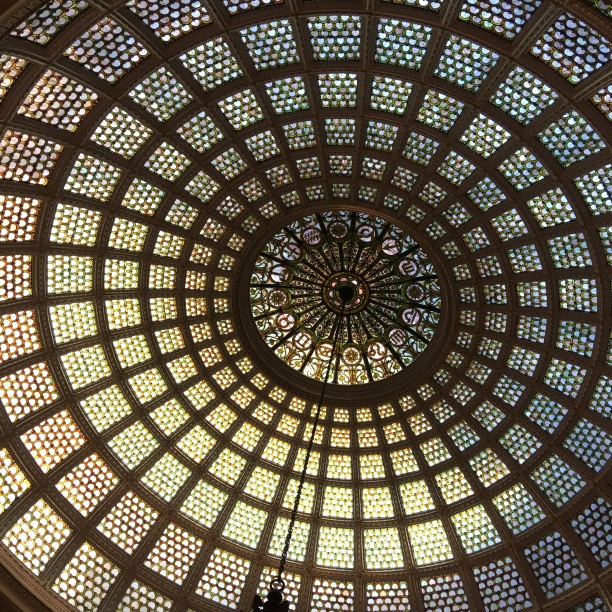 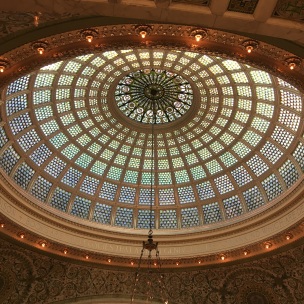 Then off to Millennial Park to see the grounds and the gardens – a green oasis from the steel, concrete, and glass.

Not to be missed in Millennium Park is the amazing, technological Crown Fountain. This fountain is two rectangles facing each other, with human faces projected on them.  The faces change maybe every hour, and we are told there are hundreds of faces.

The video is a quick 5 seconds of Crown Fountain.

Cloud Gate, more commonly called The Bean, is a public art sculpture that you can walk under and through.  The pictures do the experience of this art justice.

Going inside The Bean show many perspectivess 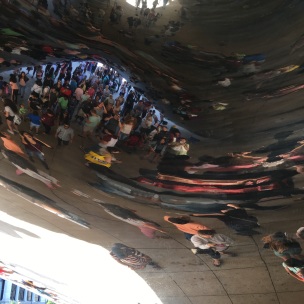 Another perspective of The Bean

Needing some nutrition at this point, we went to Garrett Popcorn.  If the smell doesn’t melt you like the beautiful butter in the toffee, the complimentary samples will.

We closed out the day seeing the Second City Comedy – the show was great, funny, clever, meaningful, and unpredictable.  Needing late-night food we went right across the street to Adobo Grill a tasty taqueria with joyful margaritas.

Second City was the one activity we got tickets for ahead of time.  Definitely put this on your list for Chicago.  The drinks there are good too.  And one of my friends became part of the act – she was a natural comedian but I already knew that.

Sunday started with brunch overlooking the river at a place called The Kitchen.  Great food and great menu.  They even have homemade pop tarts for brunch.

Often restaurants with amazing views don’t seem to think they need to rise to the occasion on food, but The Kitchen certainly did.  Then after the meal I found out about their nonprofit called The Kitchen Community that uses Learning Gardens to provide real food education and access to children.  If you follow me regularly you know how much I believe in benefits of sustainable gardens for growing your own food.

Then we explored the McCormick Bridgehouse & Chicago River Museum.  This unassuming museum is well done and interesting, especially around the role that the river played in the history of Chicago.  It shows how, with care and intent, a major city can in fact clean up a river – and have both recreation and wildlife return.  It also shows the amazingly simple engineering used to open the drawbridges that are up and down the river. 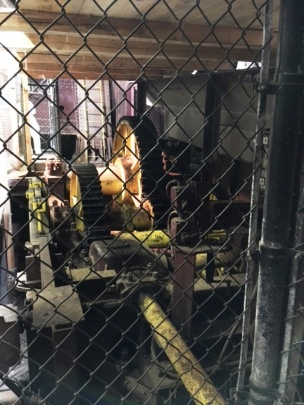 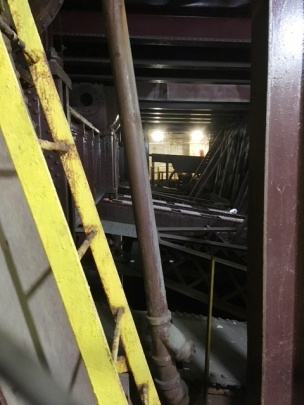 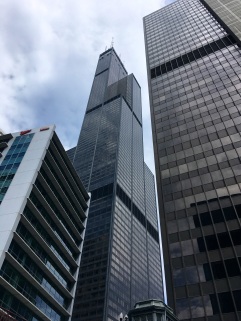 The Sears Tower, now sometimes called the Willis Tower, is the 8th tallest building in the world with 108 stories.  Architecturally this building is really a set of bundled tubes allowing “structural integrity and efficiency.” In the picture on the right, towards the top you may notice pods sticking out from the building.  This is the all-glass Skydeck on the 103rd floor.  It sticks out over 4 feet from the building and you can go out and stand in it (and hope the glass doesn’t break so you don’t tumble 103 stories to the ground).  We did not have time to do this – future trip.

And then it was time to head back to the airport.  So many things we did not do, but hey that just means we have to go back some time.

Logistics.  We stayed in an AirB&B by Old City and that worked out well.  We walked or took public transit wherever we needed to go (including to/from O’Hare).

Overall Impressions.  Chicago is a huge city.  Compared to Philadelphia, San Francisco, Los Angeles, or New York, Chicago is much cleaner.  Never once did I feel unsafe.  They have done a great thing with their Chicago Riverwalk and much more.  Would I go back? Oh heck yes!