Today’s guest blogger is Mark.  Mark had recently flown Frontier Airlines roundtrip between Charlotte and Philadelphia.  I asked him to document his experience for PaulSeesTheWorld as I have never flown Frontier Airlines but I know it offers some very low prices on select routes. Read on to see if the savings are worth it.  Thank you Mark and here is his report.

I needed to fly from Charlotte, NC to Philadelphia, PA on short notice.  Because I was flying between two American Airlines hubs, I hoped ticket prices would be reasonable.  But it was quite the opposite – American Airlines ticket prices were ridiculous running about $670 to $751 for a direct flight.  Say what? For that kind of money I should be flying to a place like Paris or Aruba.

I looked at other airlines and they too were expensive with long or distant connections. 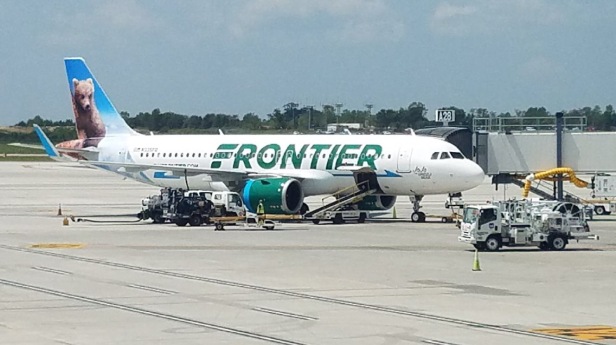 And then there was Frontier Airlines that had direct-flight tickets for $155 round trip.  This price allows for one bag that fits under the seat in front of you.  Any other checked bags ($30) or cabin bag ($35) are extra.  So is selecting a seat in advance (up to $45), as are soft drinks ($2.99) and snacks ($2.99). Considering most carriers charge for checked bags and early seat selection anyhow, it did not seem a big difference.  Simple math showed that Frontier was still a significantly better deal financially.

For $50 you can join Frontier’s Discount Den which can save you some nickels, dimes, and dollars if you fly enough.

The big drawback, especially during thunderstorm or winter storm season, is that Frontier has a low frequency schedule for some destinations, including Charlotte and Philadelphia.  They only offer one flight a day and only on Mondays, Wednesdays, and Fridays.  So had there been really bad storms, or a broken down plane, or anything that cancels a flight, the earliest you are getting to your destination or home is 2-3 days later than planned.

Advice – Check Frontier’s overall schedule to and from your destination before buying a ticket.

Our flights were on time.  Boarding was easy and fast.  I think that the significant charge for cabin bags makes people bring much less into the cabin and therefore boarding (and debarkation) are notably faster.

The plane was an A320.  It looked nice and new enough, however:

Honestly, with me being about 5′ 8″ tall, the seat was fine for an hour and a half flight.  I’m not sure I would say the same thing for a coast to coast flight.

Allegedly the middle seats are about an inch wider than the window or aisle seat.  It was hard to tell by just looking at the seat.

Food and beverage-wise, except for the charge for soft drinks, everything else is pretty standard pricing for airlines. 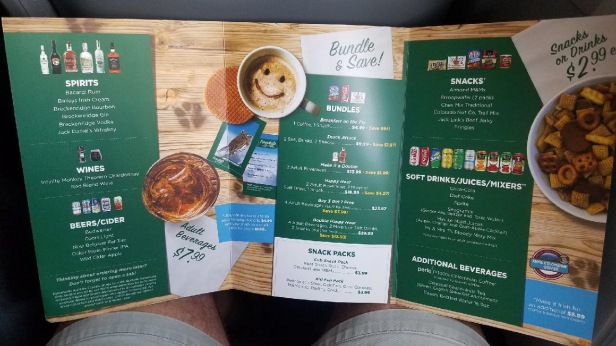 The pilot gave us a great city view of Charlotte at landing. 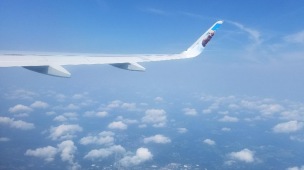