Misconception #1:  British Airways First Class is “the best Business Class product in the sky.”  My Experience:  Theirs is absolutely a first class product that stands on its own and is of a first class caliber.

I recently wrote an article called Which International First Class is Best: Cathay Pacific, Qatar, or British Airways? I evaluated each of the flights based on 11 first class criteria.  Believe me, all three airlines provided a wonderful and unique first class experience.  I am thankful and blessed to have the opportunity to have flown each of these.

In this post, I take a more detailed look at flying British Airways International First Class. 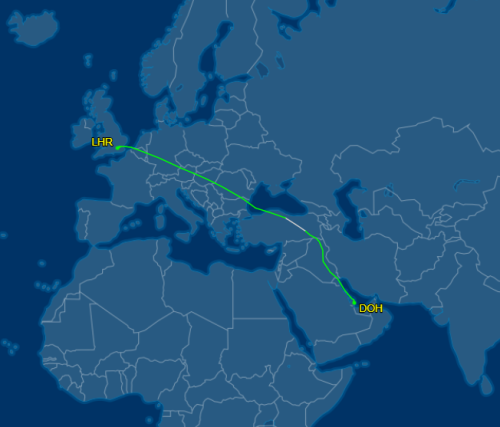 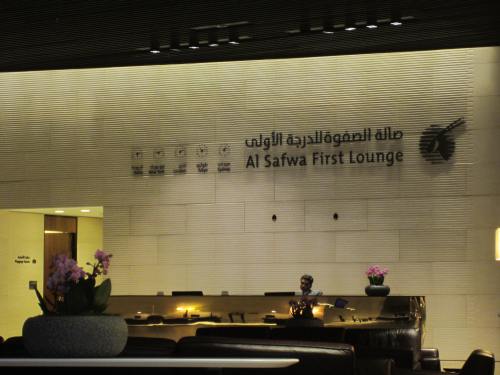 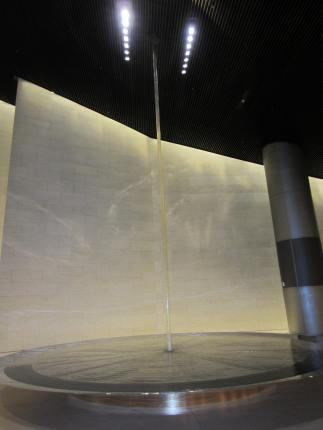 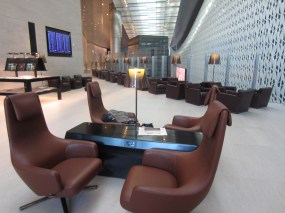 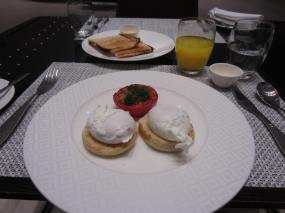 British Airways will tell you to go to the Oryx Lounge at Hammad, but trust me and ignore that.  Make your way to the Al Safwa lounge.  It is an experience unto itself.

Security.  There was an extensive security check to get into the gate area.  I am not sure if this is standard for all flights at Hammad airport, or only for flights to certain countries like UK and US in response to the electronics ban in the spring of 2017.  No privileges based on class of service for the security check.

And then we were called for boarding.

First Impressions.  My first impressions upon being escorted to my seat was the warmth of the purser and flight attendants. My second impression was how elegant and well-designed the suites were.

Service.  The flight attendants introduced themselves, asked how I was, explained the suite to me.  They showed me the closet in the suite and offered to hang my jacket, which was sort of embarrassing considering how torn up and smelly the jacket was.  I apologized my jacket was in pretty ratty shape as I had been biking and hiking through Laos.  She was clearly intrigued with Laos having never had been there and commented that she bet my jacket certainly had been through some wonderful adventures.

To me, this was the ultimate in both etiquette and service.  Not only did the flight attendant diffuse any embarrassment I might have had about this jacket being in first class, but she turned it into a positive.  That pattern of being real, being positive, and being warm continued throughout the whole flight.  I have nothing but amazing things to say about the British Airways first class crew.

Pre-takeoff offerings.  I was presented wonderfully comfortable pajamas wrapped with a bow (in my size unlike on Cathay Pacific) .  I was offered Laurent Perrier Grand Siècle Champagne.  I am a big fan of this champagne as is mellow with hints of dried fruits and honey; and it was chilled perfectly.  I was given a lovely amenities kit featuring Refinery products (which ugh I neglected to photograph).  The amenities kit also had a metal British Airways pen in it.  I believe all amenities kits should have pens and I love good quality pens so bonus points for this amenities kit.

Immediately before takeoff we were offered a delightful Arabic Coffee and Date service and presented menus for the flight. 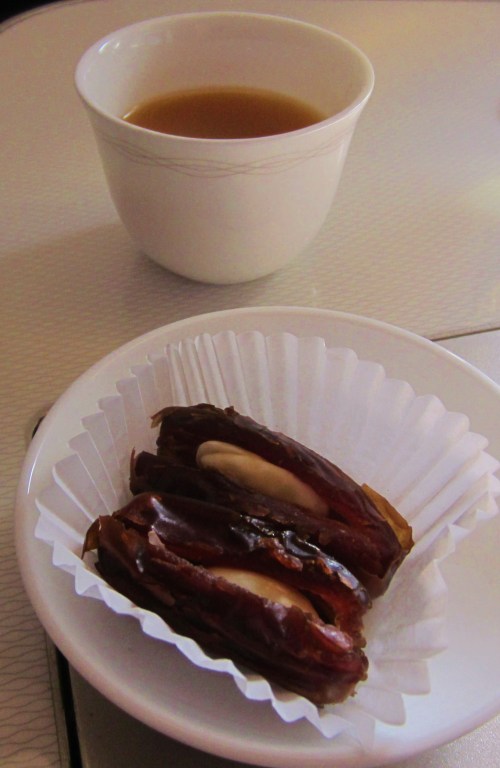 British Airways first class cabin on the Boeing 777-200 holds 16 open suites. Although this is a somewhat high density of seats with this class and cabin, the layout and suite design allows for plenty of privacy.  The the suites themselves are beautiful.

Suite.  The seat width is a comfortable 22 inches, and the pitch is 78 inches.  The chocolate brown color pattern worked well, and the cabin seemed almost new and exceptionally clean.

Although I did not have the seat made into a bed for this daytime flight, I believe I would have slept remarkably well in this seat on this plane.

Entertainment.  The entertainment selection was plentiful and broad.  I picked movies to with British themes:  Churchill (outstanding movie about Winston Churchill’s struggles and reservations before the Normandy invasion) and Kingsman:  The Secret Service which is a fun movie based on the comics.

Bathrooms.  The cabin had two bathrooms for 16 first class passengers.  I was a bit surprised that the bathrooms seem like standard economy-class bathrooms in what is already a tight galley.  Nothing special with them. However, they remained pristinely clean the whole flight.

Once we reached a comfortable cruising altitude, the flight attendants offered beverages and warm nuts which were a mix of candied and salted nuts. 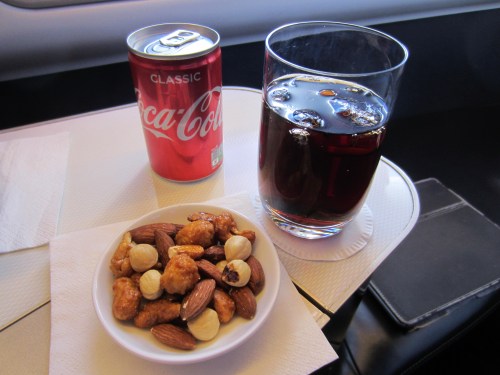 The attendant asked me if I might enjoy lunch now or if I preferred to wait.  I was quite hungry so I said yes to lunch soon after takeoff.  I was pleasantly surprised how extensive the menu was.  Click the thumbnails if you are interested in reviewing their first class menu and wine/beverage offering.

Amuse-Bouche.  We started with a plate of smoked salmon rillette and Balik-style salmon.  I was not familiar with Balik Style salmon but learned that it is a center cut/best cut of the salmon. It was wonderful.

Wine.  I enjoyed the Château Olivier Pessac-Léognan Grand Cru Classé 2010, a nice and respectable Bordeaux that paired beautifully with the upcoming soup, and worked well with the chicken entree.  That said, one of my little particularities is overfilling a wine glass.  Additionally, this wine would have benefited from a larger bowl in the glassware.  But considering we are in an airplane this is hardly a complaint, just something to point out.  That said, this Bordeaux was lovely.

Starter.  I asked what harira soup was.  I was told it is a soup of tomatoes, lentils, and chickpeas in a lamb broth.

This soup was beyond delicious and the herbed dukkah bread nicely complimented the soup.  When the flight attendant came to clear the soup bowl, and noticed not a drop of soup left, she gave me a sincere smile to acknowledge my enjoyment.  Another example of humanized service which I appreciated.

Main.  The choices for the main course were lamb shank, herbed chicken, Egyptian-style fish, spinach and ricotta tortellini, or salad with poached salmon.  Atypical of me, I selected the chicken. It was moist and pleasantly seasoned. The gnocchi was cooked correctly and added a nice complement and the spinach was flavorful.   This was successfully a first class chicken entree.

Dessert.  Given the choice between toffee pudding or panna cotta, well nothing against panna Cotta (yawn) but toffee pudding….with toffee sauce…..not even worth asking. 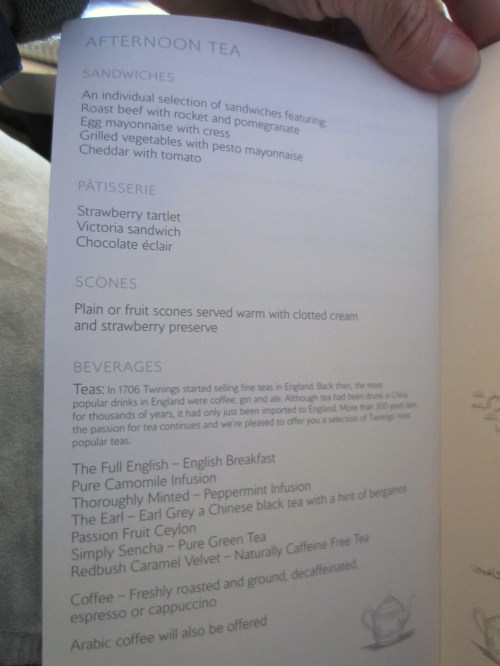 A highlight of this flight was the Afternoon British Tea.  I selected the lovely Sencha green tea.  And the food kept coming. 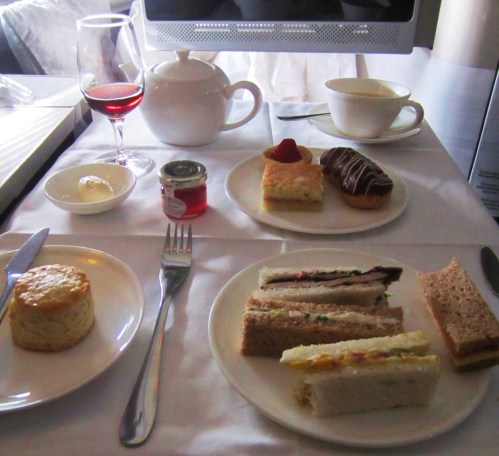 The sandwiches were tasty (especially the roast beef sandwich).  The pastries were fresh.  But oh that warm scone with the heavenly clotted cream.  And no tea would be complete without a glass of port, in this case a smooth Warre’s 2000 Colheita Tawney Port.  I really expected a string quartet to walk through the aisles just to complete the experience.

We landed 7 1/2 hours after takeoff, and I would have been fine staying on the plane another 7 1/2 hours.  British Airways deserves to be proud of its first class offering.