When our gracious host asked if there was anything in particular we wanted to see in Ecuador, the answer to me was obvious:  I wanted to see the equator.  I mean the whole country is named after the equator, so it seemed a pretty worthwhile thing to see.   Sort of like when you go to France, you want to see what real French Fries look like.  Or in Turkey, you’d expect to see some turkeys flying around.

But most importantly, I was hoping someone would ask me, “Hey Paul, what Latitude are you at?”  And I would be able to answer, “Latitude 0 degrees 0 minutes 0 seconds.”  How often do you get to answer saying that? Not often I bet.

I really liked this place and I had a bunch of myths busted and questions answered about the equator.  Plus they have really good empanadas and beer there.

The Equator is Yellow

So what did I learn?  Well for one thing, the equator is yellow.  I am not sure why, but it is definitely yellow.  You can see it in the pictures.

It made me a little upset with the people that make maps and globes, because they show it as a thin grey line, not a thin yellow line.  The map and globe makers show oceans as blue, so how hard could it be to show the equator as yellow.

How many people from the United States or Europe take an iphone video of themselves flushing a toilet in Australia?  A lot.  And why?  Are they looking to show the last of their…um… dookie being flushed down?  No, they are looking to show the Coriolis effect.

The Coriolis effect dictates if water drains to the left or to the right based on what hemisphere you are in.  A Coriolis force tends to deflect moving objects to the right in the northern hemisphere and to the left in the southern.  It really comes into play in large systems like tropical cyclones/hurricanes.

If water drains to the right in the northern hemisphere, and to the left in the southern hemisphere, one might conclude it goes straight down at the equator since the coriolis force would be neutralized.

However, sorry to disappoint all you toilet Instagramers, but a sink or toilet is not a large enough scale to be affected by Coriolis force.  The water will drain in what ever direction it was predominantly put in at.  Guys you can try this at home.  Pee in a bucket with a plug at the bottom.  Aim to the left, and it will drain to the left.  Aim to the right and it will drain to the right.  Regardless of what hemisphere you are in.

It’s Not Hot at the Equator

Going to see the equator was really cool.   Mostly because it was at 8084 feet above sea level.

Its wasn’t.  We even wore jackets at the equator.  Myth busted.

Is there Daylight Savings Time at the Equator?

Ecuador does not observe daylight savings time because they don’t need to.  The average amount of sunlight is around 12 hours all year in Ecuador.  They are on the equator so of course days are about 12 hours long.

Granted some days are a bit longer or a splash shorter than other days depending on the season.  As in 2 minutes longer or shorter.  Two minutes!

I once went to Alaska in June (summer solstice) and it got dark around 1 AM, then the sun came back up around 4 am.  And in December the daylight is very limited in northern countries like Iceland, Canada, or Norway.  Opposite happens in the southern hemisphere.

We were told they are not a perfect 12 hours because the earth is tilted a bit.  I would explain the physics behind this, but I do not understand them.

The story goes that you can balance an egg on a nail at the equator but no were else.

If you want to take a break from reading and try to balance an egg on a nail at home, go for it.  But use a hard boiled egg, because that egg is going to fall.  We did not try this at the equator, because everyone said its a myth.  And also we did not have an egg or a nail. But if we tried, we were assured it won’t work at the equator either.  All you will have is egg on your hands.

Being in both hemispheres at once makes a person hungry.  And being Ecuador, a country where all the food is excellent, they again did not disappoint.  Amazing empanadas and beer. 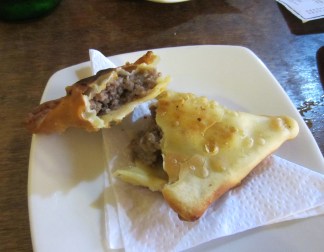 Thank you for reading, and I hope you learned something in this post.  Or not.

9 thoughts on “Visiting the Equator”